Inspiration in Mayfair on MONDAY 8th of January 2018

Home/Events, london/Inspiration in Mayfair on MONDAY 8th of January 2018
Previous Next

Inspiration in Mayfair on MONDAY 8th of January 2018 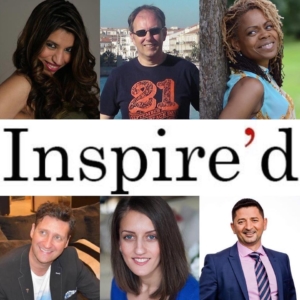 We would like to invite you to Inspire’d Stage event on Monday 08.01.2018 @19:00 in Mayfair to celebrate together our 4th anniversary and first edition of the year!

We have a phenomenal line up for you including:

Joel van der Molen is a serial entrepreneur, actor and speaker who grew up in South East England. He attended one of London’s most prestigious Drama School before following an entrepreneurial path that lead him to create and grow Vandercom into a successful Technology company.
Joel is a co-creator of the Living My Illusion, Real Life Coaching Documentary Series.

Steffie Martin is a girl who at the age of 21 decided to not settle for less than she wants anymore and made the biggest change of her life.
She had a well paid job that she didn’t enjoy. Had just come out of her first long term relationship because she found out that her boyfriend was cheating and she was in a country where she just couldn’t picture herself living.
By August 2008 she knew that if she didn’t make a change, she was going to lose her mind – literally.
She decided to embark on a journey of self-discovery, healing and becoming who she always wanted to be and at the end of September she moved to the UK. She found a job in London and never looked back!
She studied alongside her job, got a few qualifications and 3 years ago she started her first business in Property Management.
Last year she started her second business in Mindset Coaching and Mentoring, she gave her first talk on Confidence at Virgo Fidelis Sixth Form and in December applied to become a mentor for young people with The Prince’s Trust.
Her favourite quote is “Life will only give you what you have the courage to ask for” by Oprah Winfrey.

Tony J Selimi is an unshakeable optimist and an authority on the psychology of maximising human potential who assists business owners from all market sectors and individuals from all professions to find solutions to their challenges so that they achieve quantum leaps in creating healthy, wealthy, and meaningful lives.

He founded TJS Cognition as Coaching, Mentoring, Speaking, Consulting, Education and Service institution dedicated to Expanding and maximizing the frontiers of human Awareness and Potential. His mission is to inspire one billion men and women of all nationalities, creeds and colors to become purposeful and disciplined masters of themselves and dedicated and inspired leaders of others.

Described as “a visionary thinker with a rare ability to see through people’s disempowered states, belief’s, and behaviours and awaken their innate genius, wisdom and love,” he teaches leaders and organizations how to engage, empower and elevate people thus inspiring action that increases performance, productivity, profits, people’s vitality and overall personal and organizational well-being.

He is internationally bestselling author of A Path to Wisdom and a five times award winning #Loneliness. The documentary “Living My Illusion” he co-created with his business partners won the Los Angeles and Hollywood Film Awards. Tony has appeared on over 100 TV/Radio stations across the world including being interviewed by the creator of “Chicken Soup for the Soul TM” Jack Canfield and the legendary Brian Tracy for ABC, NBC, CBS, FOX and their affiliates reaching over 50 million viewers worldwide.

Using the conscious principles of his TJS Evolutionary Method: ALARM ™ he helps people and organizations tap into their true potential by creating the mindset, behaviours, and the nurturing environment where potential can thrive and people can expand their clarity of thought, vision, focus and purpose. Tony is working on infiltrate the principles of TJS Method in schools, academia, business, healthcare, and government sectors across the world.

Carmen Harris was born in Marverly, Kingston, Jamaica and emigrated to the UK at the age of 5. After graduating from London University with a BA Hons in Sociology, she first worked as a writer in fringe theatre, a sub-Editor for Chic Magazine, a corporate scribe and a published children’s author (Heinemann and Orchard Books) before becoming a professional TV scriptwriter for 20+ years. Under the pen-name of Lisselle Kayla, as well as penning 2 series of her own original primetime BBC1 sitcom, ‘Us Girls,’ (the first such in the UK for a black female writer), she went on to work in many professional writing genres including Radio, Children’s and Drama, ending her last 10 years as a core writer for the popular BBC1 soap EastEnders. In 2009 her life changed completely, as did her career direction, when she discovered her gift of being able to detect and manipulate the body’s electro-magnetic frequencies (aura) to effect profound healing. Latterly, she has widely studied the field of Energy Medicine; is qualified as a practitioner in many healing modalities; has successfully treated hundreds of clients; has collected many remarkable healing testimonials; and her clients range from the unemployed to well-known celebrities (see her working with the late Bobby Womack on YouTube). In addition to running regular intimate gatherings to reconnect Women with their natural and intuitive healing abilities, there are over 2k members on her worldwide Free Distance Healing FaceBook group. Carmen is author of several books including the self-help/biog published by O-Books, ‘Sh*t Happens, Magic Follows (Allow It!).’

THE WILDCARD! As always, our line up could also include YOU! The Wildcard slot is chosen from our audience from those that are wanting to speak on the night – these are ALWAYS magic – could it be you this month?!

Our loving host is: SHAY ALLIE

We look forward to seeing you all!

Receive the best content in Personal Growth – including exclusive offers, and free seats to world-class online events. Sign up below.